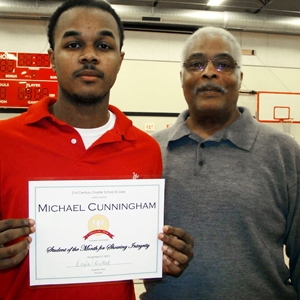 Michael Cunningham earned the first “A” grade of his life when he arrived to 21st Century Secondary Charter School. After having earned D’s and F’s in his previous school, this first grade gave him a lot of hope about his future at 21st Century. His first A grade wasn’t without a lot of work however. Michael Cunningham credits Mr. Ford with catching him up to speed in the challenging Math classes offered at the 21st Century Charter Secondary School.

Mr. Ford noticed that Michael wasn’t sure of what to do in class, but saw that Michael clearly had potential, so he worked with Michael individually each class period to make sure he understood the lessons and catch him up with Math from previous years that Michael hadn’t mastered. Mr. Ford was the first teacher to teach Michael any advanced math skills.

Being at 21st Century Charter Secondary School has motivated Michael to work hard for himself. He currently attends tutoring every day for one hour where he stays on task and works on homework or gets extra help from teachers. Students aren’t allowed to talk or socialize during tutoring, so Michael says he is able to utlize this hour well.

Michael transferred from Roosevelt High School to 21st Century Charter Secondary School to find a place where all students were focused on learning and post-college success, where students were challenged. Michael also benefitted from the small school environment—there wasn’t anywhere for him to go to skip class or hang out with friends—the only place for him to go is to class. He is also surrounded by motivated peers that have inspired him to pursue a four year college as well. Michael was so motivated by his peers that he even signed up for an Ivy Tech class through the 21st Century Early College Program. Through this class, he’s been strengthening his communications skills, learning how to write a resume and cover letter, write an essay, and strengthening his public speaking skills.

Michael knows it won’t be easy to gain acceptance to a four year school. He arrived as a junior to 21st Century with a 1.1 GPA and has been steadily working hard since then to raise his grades and his chances of attending a four year school. Michael’s mother is so proud that he has earned mostly A’s and B’s since joining 21st Century Charter School, and hasn’t had any incomplete grades. 21st Century teachers like Ms. Nowicky are invested in him too—she regularly works with him during study hall on ACT prep work. At first, attending school at 21st Century was a shock—“there wasn’t anywhere to wander around, and there were so many adults on the lookout,” he says as he laughs. Michael feels safe here at 21st Century. He’s able to focus when he comes to school because he doesn’t have to worry about fights, other students stealing from him, violence in the hallways, and unruly classrooms. He’s able to focus on academics, work with teachers like Mr. Smalley on improving his vocabulary on a one on one basis.

Mr. Ford, a Math teacher at 21st Century Secondary Charter School remembers Michael when he first started at the school. Mr. Ford knew Michael had potential, and he saw Michael as a good person and a good role model.

Michael has seen a transformation within himself as a result of attending 21st Century Secondary Charter School. He now does homework every single night, as opposed to not receiving any homework at his former school. And he works hard on his homework because he knows he wants to go to college—a want that arose once he arrived at 21st Century. Michael knows he’s behind his classmates in terms of where he stands in terms of achieving his future goals, but he’s determined to make it happen nevertheless. He regrets not coming to 21st Century sooner, and not being able to complete an Associate’s Degree while he completes his high school education.

21st Century took Michael on his first college visit—to Ashford University. He had never been to a college campus before, and his only impressions were from television. Michael wants to become a part of the diversity and challenge of college–by meeting new people from different places and backgrounds, taking different classes, After visiting Ashford University with 21C, Michael decided that he also wanted to attend and graduate from a four year college.

21st Century has fueled Michael to want more for himself, and his future family, including a wife and children. Michael says that previously, he didn’t think that far ahead in the future. Now at 21st Century, all he hears and thinks about is the future. “I want to work hard for my self and my family,” Michael says.

Michael is even honing his basketball skills as the Forward position on the 21st century basketball team—while he used to play basketball on the street, this is the first time Michael has ever played on a team—and he says practice is rough since he never really exercised before. He has to work hard to stay and keep in shape in order to compete and play the game. His basketball team is like a family to him, he says.

In the future, Michael wants to pursue a mass communications program at a four year college and work in the radio or TV industry. As Michael said, “I am going to make my dreams happen.”