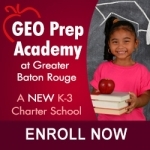 They bring the total number of charter schools in East Baton Rouge Parish to 25, double the total just three years ago. Charter schools are public schools run by private organizations via charters, or contracts.

All four of the new schools bill themselves as places that will prepare children for success in college. The vast bulk of their students, though, wont be old enough to enroll in college for another decade.

Each offers a different formula for how to get them there.

At Democracy Prep Baton Rouge, for instance, the focus is on creating active, informed citizens from the youngest age.

If a kid hasnt done a phone bank or raised money for a cause, they cant graduate from Democracy Prep, explained Alice Maggin, a spokeswoman for the New York City-based charter management organization, which operates 17 schools in three states, as well as the District of Columbia.

Start-of-the-day classroom meetings are called town halls. The need to change the world is reinforced repeatedly throughout the school. Come Election Day, students will canvass the community wearing T-shirts and handing out fliers saying, I Cant Vote, But You Can!

This week, new students are learning more basic concepts. They are participating in a weeklong orientation ahead of moving to a regular schedule next week.

On Tuesday morning, about 90 sixth-graders sat on the floor watching Shelby Godfrey lead them through a deceptively simple math lesson, while eight other adults circled them, urging them on.

Godfrey, an energetic math teacher, had the children methodically counting to 10, from left to right, one finger at a time. She would later use this same method to teach skip counting, in which students counted numbers in multiples of three, as in 3, 6, 9, 12, and so on.

If any student failed to participate Tuesday, everything would stop until that student got on board.

After several such interruptions, Executive Director Michelle Gieg stopped and explained why the school is so insistent on everyone participating: It is so important we do things together as one team, one family. Even if you did it perfectly, we had a teammate who did not. So were going to do it again and again and again until we have every single teammate participating.

Afterward, Gieg said students are more likely to succeed in college if they learn to work together and hold each other accountable now.

Youll see us be really strict and hold every scholar to our expectations, but you also see us be really warm, too, because its that balance of joy and strictness that gets a kid to a community where every kid feels safe, she said.

All four new schools, approved in fall 2003 by the state Board of Elementary and Secondary Education, have spent months recruiting students. All four still have a few openings.

GEO Prep Academy, located at 4006 Platt Drive, is part of a charter school network based in Indianapolis. GEO, which stands for Greater Educational Opportunities, is enrolling about 200 kids in kindergarten through third grade. It plans to eventually expand to 12th grade.

Sandra Douglas, the schools principal, spent years as principal of Claiborne Elementary in Baton Rouge and was later an administrator with the East Baton Rouge Parish school system. Her new school, which opened Tuesday, is using the ambitious Core Knowledge program for literacy. Teachers participate in the Teacher Advancement Program, or TAP, which pays teachers more if they take on more responsibility and meet school goals.

Another feature is an extended school day, from 7 a.m. to 5 p.m. Students even eat dinner before their parents pick them up, Douglas said.

Unlike the other three schools opening this week, GEO Prep Academy does not offer transportation.

We have lost a few people because of that, but the good thing is the people who are coming really want to be here, Douglas said.

Three of the four new schools are part of the state-run Recovery School District, or RSD, and operate out of former East Baton Rouge Parish public schools. They are all led by former Teach for America educators who previously taught in Baton Rouge.

Democracy Prep is one. It is operating in the former Prescott Middle School, which was empty last year, and is starting with a kindergarten class and a sixth-grade class. Next year, it plans to add classes for first and seventh grade, and keep growing two grades at a time. It plans to add a high school in the future.

The other two new RSD schools are Baton Rouge Bridge Academy and Baton Rouge College Preparatory Charter School. They are sharing space with a third school, the 1-year-old UP Elementary, all on the campus of the former Glen Oaks Middle School. The leaders of these three schools spent two years developing their charter schools through the Boston-based incubator program Building Excellent Schools.

Chloe Wiley, founder of Baton Rouge Bridge Academy, said that, as a short-term arrangement while the new schools are small, having three schools under one roof is manageable.

Its not uncommon in New Orleans for three, even four schools, to be in one building, but its something new to Baton Rouge, said Wiley, who worked for three years as an instructional coach at a middle school in New Orleans run by the popular KIPP charter school network.

Like Democracy Prep, the three schools at Glen Oaks are starting small but have different grade configurations. UP plans to go from kindergarten to fifth grade; its highest grade now is first grade. Baton Rouge Bridge Academy is starting with just a kindergarten of about 80 kids but plans to expand all the way to eighth grade. Baton Rouge College Prep is starting with fifth and sixth grades but eventually will expand to 12th grade.

Kathryn Rice, founder of Baton Rouge College Prep, said she intentionally started with fifth grade, the year before middle school starts, in order to accelerate the learning of children who may be behind their peers.

Were making sure that we are genuinely catching kids up so we can roll on up into middle school and make sure they are ready for college, Rice said.