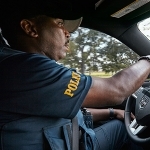 “A Black Cop Confronts the Crisis of Police Shootings and Racial Conflict: ‘We All Bleed the Same.'”

Black cop Robert McGarner has grown used to race entering the conversation as he works his beat in Baton Rouge, Louisiana. You hear it all the time, he says, just after a black teen he questions outside a convenience store in the midst of a school day storms off with a cutting remark accusing the police lieutenant of harassing his own kind. Lt. McGarner lets it go with no apologies. Homicides in the neighborhood are up, and teens increasingly are armed. He has to be vigilant.

You have people out there thinking, All police officers are this, all police officers are that. At the end of the day we all bleed the same, McGarner tells PEOPLE in this weeks issue, on newsstands Friday. Were all children of God. I pray to God were going to get better, he says. After a continued string of police shootings of black men, in Baton Rouge and elsewhere and a backlash of attacks on officers, including three who were killed and three more injured in Baton Rouge by a gunman authorities say was driven by racially-motivated fury police violence has been met with increased scrutiny, protests and federal investigations.

And while its never easy to be a cop, that combination makes it an especially uneasy time to be a black cop. McGarner, a 47-year-old married father of a daughter in her third year studying criminal justice at college, knew all of the officers killed in Baton Rouge, including fellow black officer Montrell Jackson. Like McGarner, Jackson was also aware of the ways in which his job and his race sometimes precariously intersected. In a Facebook post between the July 5 police shooting of Alton Sterling and his own death 12 days later, Jackson expressed his fears, uncertainties and weariness. In uniform I get nasty hateful looks and out of uniform some consider me a threat, he wrote on Facebook. I swear to God I love this city but I wonder if this city loves me.

McGarner recognizes the sentiment. [Jackson] was right on point, he says. But McGarner also has felt his communitys support and sees room for healing. The deaths of Jackson, East Baton Rouge Parish sheriffs deputy Brad Garafola and Baton Rouge officer Matthew Gerald opened up a lot of eyes, McGarner says. And in the police procession that accompanied the funerals of each, he says, I dont know what other people were looking at, but I saw black and white lining the streets.

PrevPreviousGEO Prep students recite the Pledge of Allegiance for Baton Rouge!
NextTop 3 Reasons College is a Must and Not a Myth: Tuition Free Degrees NowNext

GEO Is Changing the Education Landscape…Literally!