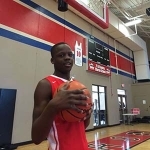 GARY — Rodney Williams and Ricky Haskins were talking about the starting lineup for their 21st Century boys basketball team right before sectionals began a couple weeks ago.

The subject of freshman guard Johnell Davis — a fresh-faced 15-year-old — came up. Haskins, an assistant coach, brought up the idea of not starting the lad and bringing him off the bench with all the looming postseason pressure.

Williams, the head coach, thought about it, too.

Then Davis went off for 20 points in the Cougars’ 76-57 win over Morgan Twp. in the Class A sectional — which made both of the coaches laugh.

“I asked Ricky if I should leave him out of the next game, too,” Williams said before Wednesday’s practice.

Davis will take a 15-point postseason average into Saturday’s semistate at Lafayette Jeff, where the Cougars (19-8) play Lafayette Central Catholic (21-6) at noon.

Growing up in the tough Dorie Miller Projects on the east side of Gary, David knew he needed something to get away from the crime and poverty. With his brother Jeffery Little playing at Roosevelt, basketball became his beacon.

He would stay on the court from 10 a.m. to 5 p.m. all summer long, his dream to be a hoops star beginning when he was 7.

“I just wouldn’t get off the court,” Davis said. “The older guys would be playing and I’d be out there shooting. When I started I didn’t know how to dribble or shoot.

“It took me a minute to get better.”

He started playing Steel City Biddy ball and his game started to erupt. He attended 21st Century for his seventh- and eighth-grade years, watching and learning from former Cougar star Eugene German, now a freshman at Northern Illinois.

German was 21st Century’s first Indiana All-Star. Davis hopes to be the next.

Davis is averaging 12.7 points, 4.7 rebounds, 2.1 assists and 2.6 steals heading into Saturday’s game. Not bad for a 6-foot-2 freshman who surely has another growth spurt in him.

“Eugene saw a lot of talent in him,” Williams said. “And I think he was right.”

Davis has started every game for the Cougars’ varsity this winter, which is rare. And his numbers are arching up, just what this program needs as it marches into its second straight semistate game.

Last March, 21st Century lost to Liberty Christian 103-80 in the semistate that was held at Huntington North.

“I was a little nervous before the regional championship,” said Davis, who scored 16 points in the Cougars’ 76-73 win over Oregon Davis. “I had never played in front of that many people before.”

Davis is a part of 21st Century’s robotics team, designing a robot that will pick up a ball. The project isn’t completed yet, but close. He wants to study science engineering in college.

And he might want to get a minor in jewelry.

Williams smiled when Davis said that.

“He’s young, he’s talented,” Williams said. “So we keep telling him, if you want a ring you better go get one this Saturday.”