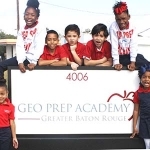 An Indianapolis-based charter school group that runs an elementary school in Baton Rouge is coming to the rescue of a larger but lower-performing charter school in town that, unless something changes soon, will close in May. The state Board of Elementary and Secondary Education isscheduled to consider a proposal at its Tuesday meeting from GEO Prep Academy to take over Baton Rouge Charter Academy at Mid City.

In December, BESE voted to close Baton Rouge Charter Academy at the end of the school year. In the process, it rejected a request by the school’s operator, Fort Lauderdale, Florida-based Charter Schools USA, to extend its charter for another year.

Charter schools are public schools run by private organization via charters, or contracts.

Jada Lewis, the BESE representative for the area, said GEO Prep has a good track record and should be able to help advance Baton Rouge Charter academically.

”I really wanted to find a solution to keep these kids together,”

The state is scheduled to consider a proposal Tuesday from GEO prep Academy to take over Baton rouge Charter Academy at Mid City, which has not scored above an F since opening in 2013, Lewis said.

After BESE’s rejection in December, Charter Schools USA sought to interest the East Baton Rouge Parish school system in taking over the school’s charter. It looked like the school’s nearly 700 students were going to have to find somewhere else to attend school next year.

Linda Johnson, president of GEO Prep’s board of directors, said she took notice at the December BESE meeting when she saw a room full of parents who didn’t want their children to change schools.

Johnson, a former BESE president herself, said she reached out in late January to Charter Schools USA. By late March, the two sides had worked out an agreement for GEO Prep to lease Baton Rouge Charter’s campus in the former Remington College building at 1771 N. Lobdell Blvd.

”They have an extremely nice facility,” Johnson said. ”They’ve invested a lot of time and energy in that building.”

GEO Prep will have some work to do. Baton Rouge Charter Academy in Mid-City, which opened in 2013 and offers grades kindergarten to eight, has never scored above an F. Its most recent school performance score is 38 on a 150-point scale. State policy calls for closing F-rated charter schools after their fourth year, unless BESE grants a reprieve.

GEO Prep, by contrast, is in its second year of operation. It earned a C after its first year, based almost solely on how its 30 third-graders performed on standardized tests. Its 77.2 school performance score is roughly double the score of Baton Rouge Charter.

GEO Prep has about 250 students in grades kindergarten to four at its 4006 Platt Drive school. It plans to add a grade each year, stopping at eighth grade.

GEO Prep has long had plans to expand beyond Platt Drive. Its agreement with BESE allows it to open two more charter schools. GEO Prep is asking BESE to amend that agreement so Baton Rouge Charter can match that school’s kindergarten through eighth-grade configuration and so it could educate 630 students, about 200 more than allowed by GEO Prep’s current agreement.

Dana Peterson is set to present the item to BESE on behalf of the Louisiana Department of Education. Peterson was recently promoted to assistant state superintendent and serves as chief executive officer of the Baton Rouge Achievement Zone, a loose confederation of charter schools launched in 2012 that seeks to turn around public education in north Baton Rouge. GEO Prep is one of about a dozen schools in the zone.

Peterson said he quickly saw the value of having GEO Prep take over Baton Rouge Charter.

”We started looking over their record over at GEO Prep and we thought it would be a good fit for that school,” Peterson said.

He also recently visited the GEO Prep campus and said he came away impressed with what he saw.

GEO Prep is one of four schools across the country operated by GEO Foundation, a nonprofit group based in Indianapolis. Charter Schools USA is a forprofit educational company and is much larger. It manages 77 schools in seven states, serving more than 65,000 students. Nine of those schools are in Louisiana and three are in the metro Baton Rouge area.

”I’m not going to tell you that Charter Schools USA was interested in losing their school,” she said.

Johnson promised that, if approved, Baton Rouge Charter would offer what GEO Prep offers. That includes Core Knowledge, a knowledge-focused school curriculum that grew out of the writings of E.D. Hirsch Jr. Teachers also make use of the techniques popularized by Doug Lemov, managing director of the charter school group Uncommon Schools, in his 2010 book ”Teach Like A Champion.”

Finally, GEO Prep subscribes to the Teacher Advancement Program, a whole-school reform model developed by the Milken Family Foundation that is being used in a number of public schools in Louisiana.

”All of those things require training,” Johnson said.

Johnson said she’s leaving personnel decisions to Sandra Douglas, ”our outstanding principal,”who will be promoted to a supervisory position.

”(Douglas) is going to oversee both schools,” Johnson said. ”We’re looking to hire a principal for our Platt Drive school and our Mid City school.”